By Alexander Collas Posted on November 9, 2017

The Satanic Temple joins the resistance. 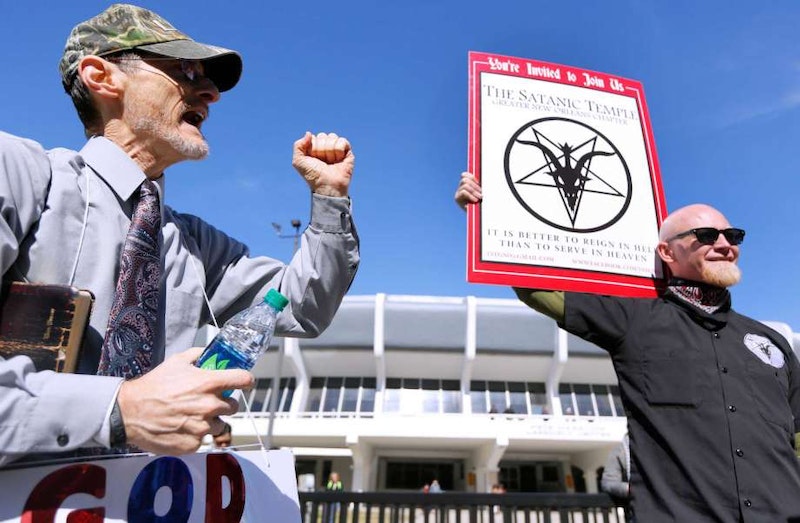 On Tuesday, comedian Jim Jefferies did a segment on his show about the rising number of Good News Clubs across America that aim to scare school children into being Christians. According to the watchdog website The Good News Club: Endangering Children, over 4,000 public elementary schools have a Good News Club, and their textbooks contain over 5,000 references to sin, over 1,000 references to punishment, and over 1,100 references to punishment. The message is, “You were born a sinful person and deserve Hell unless you obey Jesus.” In response, the Satanic Temple launched several After School Satan Clubs that teach science, rationalism, and critical thinking. While not as widespread as Good News Clubs, and despite criticism from Jefferies about the marketability of Satan, the After School Satan Club is one example of how Satanism has become a surprising force of resistance in the Trump era.

Founded in 2013 by Lucien Greaves and Malcolm Jarry, the Satanic Temple’s mission is “to encourage benevolence and empathy among all people, reject tyrannical authority, advocate practical common sense and justice, and be directed by the human conscience to undertake noble pursuits guided by the individual will.” Like Anton LaVey’s Church of Satan, the Temple doesn’t believe in a literal devil (or any supernatural beings), but sees Satan as a symbol for free-thinking, scientific inquiry, and personal freedom, which religion often discourages. Unlike the Church of Satan, the Temple rejects Social Darwinism, authoritarianism, and magic. Put another way, if the Church of Satan is Ayn Rand’s Objectivism with satanic imagery, the Satanic Temple is secular humanism with satanic imagery.

Besides the After School Satan Club, the Satanic Temple is best known for proposing monuments on taxpayer-funded public property. The most recent example was the Satanic Temple Veterans Memorial in Belle Plain, MN, which was rejected by the town back in July. It was a response to a Christian veterans’ memorial that depicted a soldier kneeling before a cross, and was displayed in a public park. After the Freedom from Religion Foundation issued a complaint that the memorial violated the First Amendment, it was taken down but later put back up in a special “free speech zone” in the park. The Satanic Temple proposed its own veterans memorial to be erected alongside the Christian one. At first the town of Belle Plain approved it, but then changed its mind out of fear of vandalism and the possibility it might “negatively impact the public’s health, safety and welfare.”

The Temple also launched the Protect Children Project, which aims to stop the use of corporal punishment against schoolchildren. According to NPR, 15 states—including Georgia, Alabama, Texas, and Oklahoma—allow the use of corporal punishment in schools, while seven states—including Idaho, South Dakota, and Colorado—don’t explicitly prohibit it. As part of this project, the Satanic Temple put up a billboard in Three Rivers, TX, condemning the town’s recent ruling on allowing paddling to be used as punishment in schools. The billboard’s message couldn’t be more clear: next to a Baphomet are the words, “Our religion doesn’t believe in hitting children.”

Despite Jefferies’ worries about Satanism not being marketable, the Satanic Temple’s work is not going unnoticed. Bustle recently profiled six female members who found bodily autonomy and personal freedom through Satanism. Temple co-founder Greaves has also appeared on Tucker Carlson’s show twice where he maintained composure while the conservative pundit resorted to childish name-calling. There’s always the possibility that Jefferies is right and that the satanic imagery will scare off too many people to make any effective long-term change. For those who can look past it, though, the Satanic Temple is proving itself to be a vital voice in the resistance.

(I would like to add something here. In the last line, it is commented that maybe the imagery of Satan will run people off, risking the long-term viability of this movement. If a person is having trouble with the imagery, then maybe before joining a secular movement that person needs to come to grips with their relationship with religion. Because if the image of Satan bothers you, then you must still believe in him and not see him as he truly is, fictional. – Alexander Collas)